“Multimodal” transit refers to multiple ways by which you can conveniently reach your destination. That could involve any combination of riding transit, driving, walking, rolling or biking. METRO is committed to helping transform Houston into a multimodal city. We make it easy for cyclists to access and ride METRO by allowing bikes on board all bus and rail vehicles. We're also creating and improving bike lanes, installing stations for on-the-go bike repair and building more bike parking areas near transit.

Scroll down for information about how to bring your bike on board, bike parking at METRO facilities, locations of bike repair stations and answers to common questions. 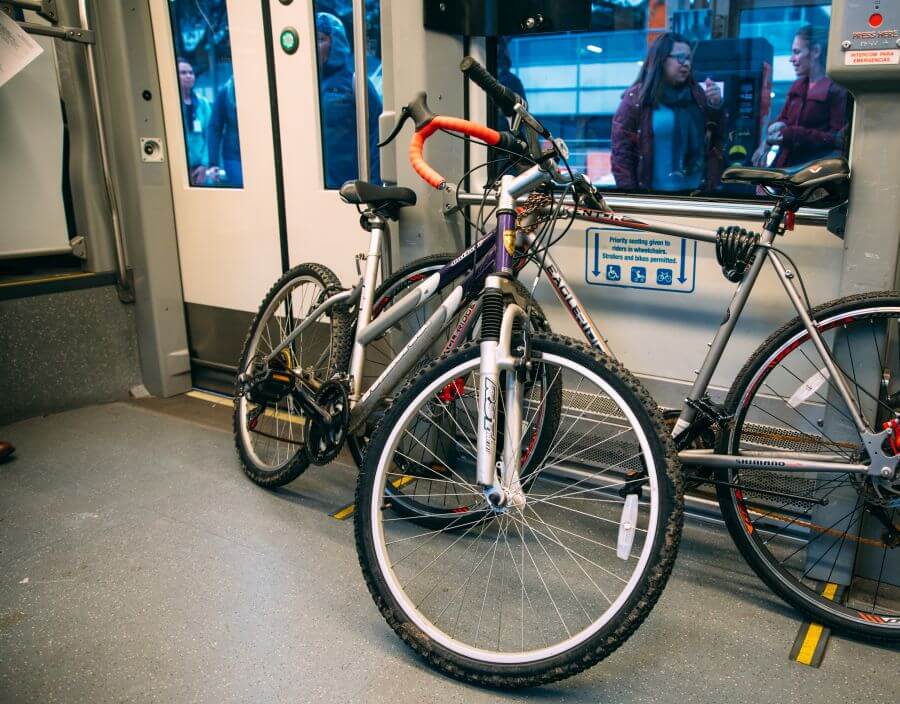 All METRO local buses have a bike rack on the front bumper that accommodates two bikes. It's easy to load your bike and snap it down to secure it. On a Park & Ride commuter express bus, you can store your bike in the baggage compartment where luggage is normally stored. 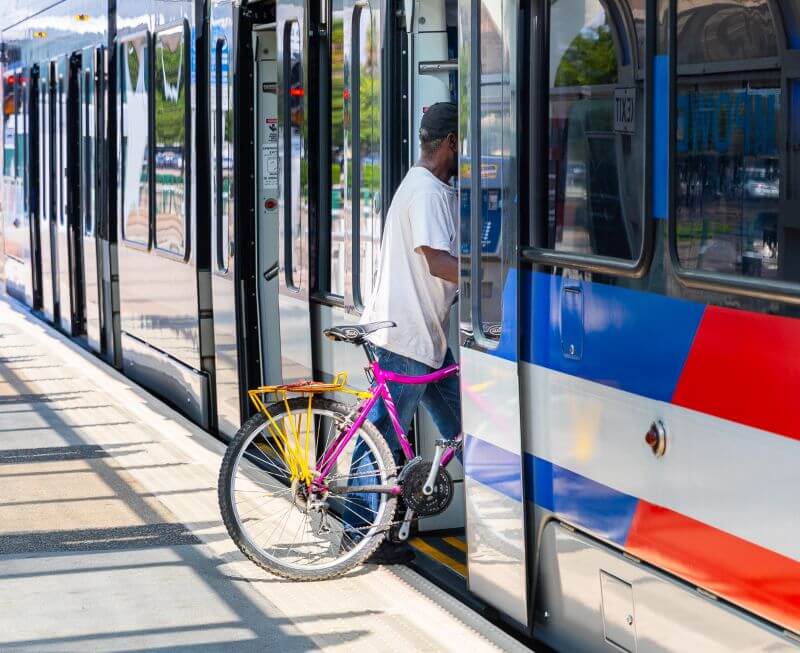 METRO makes it easy for you to park your bike and get on board. Every Park & Ride lot has loop parking. You’ll just need to bring your own bike lock. Tap your region below to find additional bike parking spaces at METRO facilities near you.

Bicycle storage racks are located at the following stations along the METRORail Red Line:

Bike repair stations are located at:

No bike? No problem. You can rent one from Houston BCycle at any of their B-stations, including many along the METRORail Red Line.

All our local buses have a bike rack on the front bumper that accommodates two bikes. It's easy to load your bike and snap it down to secure it.

On a Park & Ride commuter express bus, you can store your bike in the baggage compartment marked with a bicycle symbol.

Simply roll your bike on board. You can hold it or fasten it to a wall hook at either the first or last door of every rail car. There’s a two-bike limit per train to ensure the best use of this valuable space.

Roll your bike on board through the two rear doors and hold the bike. There are no wall hooks on METRORapid, as there are on METRORail.

Cyclists are prohibited from riding bicycles in the station areas, corridors, on platforms or in any covered areas.

Cyclists are responsible for their own bicycles and all actions, injuries, losses and/or damages resulting from their bicycles in station platform areas and on board vehicles.

Cyclists under the age of 16 should be accompanied by an adult. If cyclists violate METRO policy, they may be asked to remove their bicycles from the station areas, platforms or trains.

Yes. Many METRO facilities offer loop parking spots. Some even offer covered parking. A complete list of bike parking locations, divided by region, is found on the Accessing METRO by Bike page.

METRO Police patrol parking lots periodically but don’t monitor them around the clock, so we can’t guarantee the security of your bike. METRO isn’t responsible for any damage to bikes.

No. You’ll need to bring your own bike lock.

We’ve made investments in people, equipment, technology and education campaigns to help protect and promote your safety when biking around METRO vehicles.

We’re also a partner of Vision Zero Houston – working with other organizations to help improve safety and accessibility of streets and sidewalks. The goal is to end traffic deaths and serious injuries caused by crashes on Houston roads by the year 2030.

That’s especially important around METRORail lines. Trains travel along the street and are very quiet. Here are some things you can do to protect yourself and those around you:

In Texas, helmets aren’t required for adults. But in Houston, children under the age of 18 must always wear approved bicycle helmets, as riders or passengers.

Below are some tools to make your METRO riding experience easier and more convenient.

Operators aren’t allowed to assist you with your bike. Just alert them when you plan to load or unload your bike.

bikes on metrorapid and metrorail

Bikes on METRORail and METRORapid

Bikes are allowed on board. However, when a vehicle is crowded, METRO Police or other METRO personnel may restrict bicycles from being brought on board.

Any bicycle found at other METRORail or METRORapid stations will be subject to removal by METRO Police.

Bicycles that are folded or disassembled and enclosed in carrying bags are deemed "luggage" items and are permitted at all times.

That’s especially important around METRORail lines. Trains travel along the street and are very quiet. Here are some things you can do to protect yourself and those around you:

While waiting on any METRORail or METRORapid platform, all cyclists must remain:

If available, the on-board location for cyclists and their bicycles is the mobility-impaired/senior seating area. This space allows cyclists to fold back the seats so bicycles can be placed out of the aisle.

Cyclists must not allow their bike to:

A tool to find METRO transit services near you

Valuable information to help you ride

Compare your cost of driving vs. what it would cost to ride METRO - and see how much money you'd save each month.

An all-in-one toolkit with everything you need to ride METRO bus and rail services, including contactless fare payments.