On this page, you’ll find METRO’s service and fare equity policy, refund criteria for fare cards and mobile tickets, and information on how to pay fare citations. 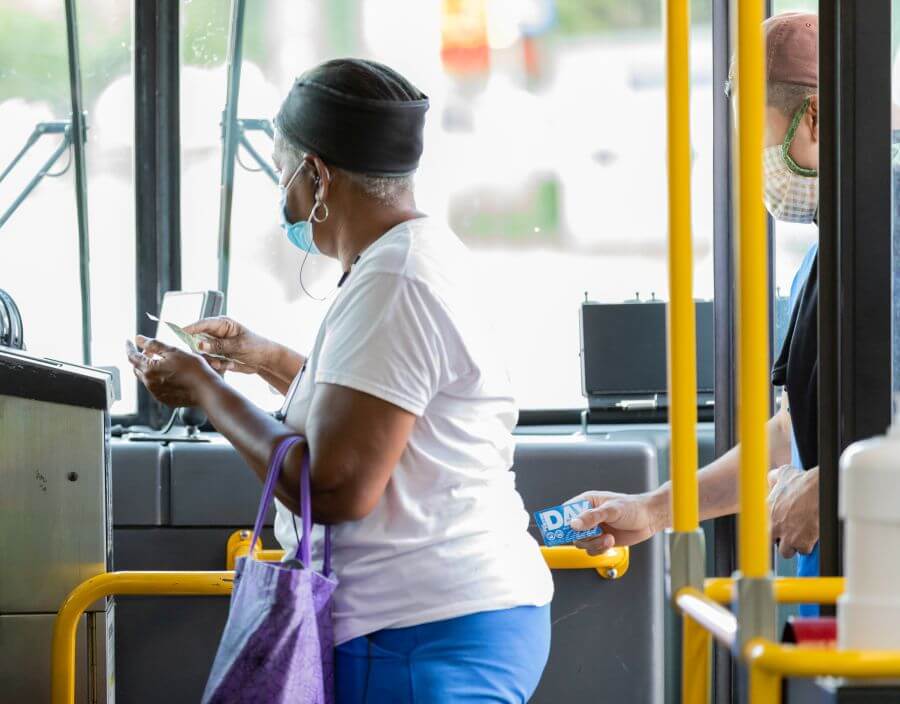 1.0 Policy Statement
The Federal Transit Administration requires that certain transit agencies evaluate the impact of any changes to its fares or fare media types to determine whether such changes will result in a disproportionate or discriminatory impact to minority or low income populations.

The purpose of this Policy is to: (1) determine what constitutes a “Disparate Impact” on minority riders and a “Disproportionate Burden” on low income riders; (2) explain how METRO will analyze such proposed changes to determine whether a Disparate Impact or Disproportionate Burden would be created from such changes. (3) specify the steps that METRO will take to notify and solicit comments from the public regarding proposed fare changes; (4) explain how public hearings or meetings will be conducted; and (5) describe how results from public hearings or meetings will be considered.

2.0 Scope and Applicability
This Policy only applies to METRO, its fixed-route bus and rail services, and fixed-route fare media type and fares charged.  All proposed fare increases and decreases will be analyzed, with the exception of temporary or promotional fare reductions lasting six or fewer months, and fares charged for demand-response service.

3.0 Applicable Legislation, Regulations and Board Resolutions
This Policy must comply with the latest amendments to Title VI of the Civil Rights Act of 1964 and Executive Order 12898 as well as the requirements of Federal Transit Administration Circular 4702.1B and Circular 9030.1E. To meet these federal requirements, the METRO Board of Directors has previously approved Resolutions 2012-85, 2013-47, and 2015-33.

4.0 Related Policies, Procedures and Forms
This Policy must be consistent with:

5.0 Terms and Definitions
A “low income rider” is an individual belonging to a household whose annual income is less than or equal to the poverty guidelines issued annually by the U.S. Department of Health and Human Services.

An “Adverse Effect” is an undesired harmful effect resulting from a change in transit fare.

“Disparate Impact” refers to a neutral policy or practice that disproportionately affects members of a group identified by race, color, or national origin.

Office of Management & Budget – Responsible for evaluating all proposed fare and fare media changes lasting more than six months, conducting the required Fare Equity Analysis, bringing the results to the METRO Board of Directors for review and approval, and then submitting the approving Board resolution to the FTA.

For all proposed increases and decreases in the cost of fixed-route fares or fare media types that are intended to last more than six months and are not mitigating measures for other actions, METRO staff will analyze the usage of the fares or fare media type to determine whether a Disparate Impact or Disproportionate Burden could occur. Usage of the fare media will be examined by analysis of data from ridership surveys. The potential impacts to minority and low income riders will be calculated and compared to the potential impacts to non-minority and non-low income riders.

When METRO proposes a fare or fare media change, a public hearing will be scheduled and advertised in such a manner as to inform the public of the proposed changes, and provide an opportunity for public comment on those changes. To ensure that customers with limited English proficiency will have the opportunity to actively participate in the process, all advertising will be prepared consistent with METRO’s current Language Assistance Plan. The official legal notice will be placed in the major metropolitan newspaper with the largest distribution (currently the Houston Chronicle) at least fourteen days prior to the date of the public hearing. Other English and non- English language newspapers having a significant community distribution will be utilized within those particular communities where the proposed fare changes are expected to have considerable impact. This determination will be made by an analysis of ethnicity and language data available from the U.S. Census Bureau using standard GIS (Geographic Information Systems) software. Additionally, METRO will publicize the public hearing by:

METRO will also solicit public comments from stakeholder and community groups by sending email blasts about the public hearing, summarizing the proposed changes and specifying the methods for providing comments. Finally, METRO may publicize the public hearing and provide a summary of the proposed changes by using social media channels such as Facebook, Twitter and blogs.

METRO conducts public hearings in the METRO Board Room, on the second floor of the Lee P. Brown Administration Building, located at 1900 Main Street, Houston or virtually as needed. For individuals with special needs, assistive services or copies of public documents in an alternate format can be provided. Individuals with impairments may call 713-750-4271 a minimum of five (5) working days prior to the public hearing. Upon request, METRO provides free language assistance to help patrons who have a limited ability to read, write, speak or understand English in accordance with its language assistance plan. Request for language assistance and other accommodations should be directed to the Board Office at 713-739-4018, or via email at METROPublicAffairs@RideMETRO.org at least 48 hours in advance of the hearing.

A summary of public comments on the proposed changes will be presented to the Board of Directors for their consideration at their next meeting following the hearing including recommended modifications as needed based upon public input.

8.0 Exceptions
The METRO Board of Directors or President & Chief Executive Officer reserves the right to amend, suspend, modify, or revoke the application of any policy standards as deemed necessary at any time, for any reason.

Value added to a METRO Q® Fare Card, METRO Day Pass or METRO Q Mobile Ticket is non-refundable unless you’ve moved out of the service area and can document that you’re no longer capable of using METRO’s services.

1. If you were the person who originally purchased the fare item, you may be eligible to receive a refund by meeting one of the following criteria:

3. You were a METROLift customer who is no longer certified and no longer qualifies for the service. This must be verified and approved by the METROLift Department. Please contact them at 713-225-0119 for more information.

4. The refund is requested due to the original purchase of an incorrect fare item.

5. The refund is requested due to documentable misinformation or schedule / route changes.

8. No refunds or balance transfers are given to METRO Money cardholders.

9. No cash refunds are given.

10. No refunds will be given if you choose to no longer utilize METRO’s services.

METRO requires customers to pay a valid fare to ride all METRO transit services. If you don’t pay your fare and/or aren’t able to show proof of payment, a Fare Inspector or METRO Police Officer could issue you a fare evasion citation for theft of services.

Violators who choose not to pay the $75 fee to METRO will have their citation submitted to the City of Houston Municipal Court after 30 days. If that happens, violators will be required to proceed through the judicial system by following the instructions on the citation.

To avoid appearing in the City of Houston Municipal Court, violators may pay the $75 administrative fee within 30 days of the date the ticket is issued. Once we receive and process your payment, the citation will be dismissed.

You may pay the $75 administrative fee to METRO by mail or in person to have your citation dismissed.

To pay by mail:

Make a $75 check or money order payable to “Metropolitan Transit Authority” and mail it to:

To pay in person:

You can pay the $75 fee with any of the following:

If you choose to pay METRO the $75 administrative fee to get your citation dismissed: