Earlier this month, METRO got a visit from U.S. Transportation Secretary Pete Buttigieg, who made his way to the Bayou City to learn more about efforts by the Authority, state, and local leaders to improve public transit.

The nation's top transportation chief toured the region at the invitation of U.S. Rep. Sheila Jackson Lee. Upon arriving at the Burnett Transit Center, Buttigieg and the Washington, D.C. delegation were welcomed by METRO Board Chair Sanjay Ramabhadran and Board Members Lex Frieden, Diann Lewter, Bob Fry, Don Elder, and Christopher Hollins, as well as METRO President & CEO Tom Lambert.

The event allowed the Authority to share news of progress made on METRONext — the long-range transportation plan approved by nearly 70 percent of Houston-area voters in 2019.

Ramabhadran delivered a presentation to Buttigieg aboard a METRORail train, detailing efforts to expand and enhance mass transit for the region's residents. The planned METRORapid Inner Katy and University lines along with the Authority’s Universal Accessibility Initiative were just a few of the highlights.

Buttigieg's visit came on the heels of the Federal Transit Administration's $21.6 million grant awarded to METRO last month for the purchase of electric buses and related charging infrastructure.

Ramabhadran said it's important for federal officials to see all that METRO and its more than 4,000 dedicated employees are doing to improve mobility. He added that investments in transit are vital to accommodating a regional population expected to double over the next two decades.

"Federal partnerships are important because they can help us get things built," said Ramabhadran. "And building a more equitable and sustainable transportation system will benefit Houston area residents for generations to come." 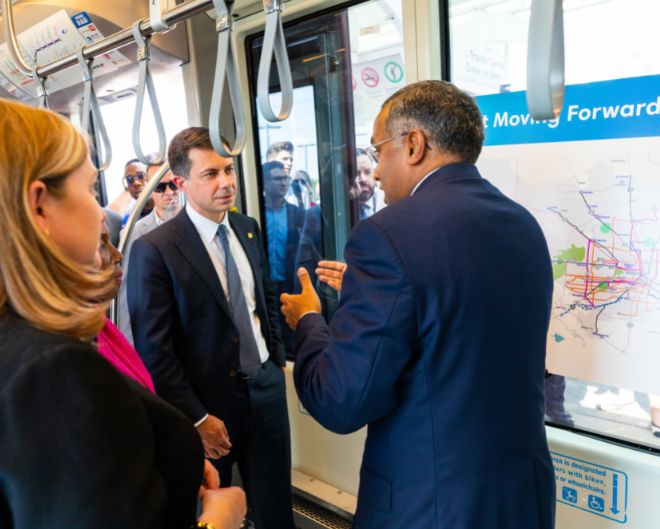 METRO Board Chair Sanjay Ramabhadran delivered a presentation on the Authority's efforts to expand and enhance mass transit for the region to the Washington, D.C. delegation aboard a METRORail train at the Burnett Transit Center.